Vaccination update from the region (2021) Roughly a year on from New Zealand’s first reported cases of COVID-19, vaccinations have begun rolling out to border and healthcare workers across the country. Meanwhile, New Zealand’s key trading partners in Asia are in various stages of their own vaccination programmes. The degree to which Asian countries will be able to vaccinate their public will have direct implications for New Zealand, including our ability to travel and open our borders to tourists, international students, and greater volumes of trade.

Our panellists were: MBIE Science and Innovation Counsellor Clinton Watson, based in Beijing; Catherine O’Connell, Principal of Catherine O’Connell Law and Vice Chair of the Australian & New Zealand Chamber of Commerce in Japan, based in Tokyo; and Ardi Barnard, recently returned from four years as MFAT Deputy Head of Mission in Seoul.

Watch the panellists below:

Catherine O’Connell described Japan’s COVID-19 response to date, which was based not on lockdowns but rather ‘applying a strong but polite request to the people’ to comply with health guidance. She outlined some of Japan’s unique challenges to implementing widespread vaccination, including the high proportion of aged citizens in the population. She also addressed Japan’s ongoing efforts to hold the next Olympic Games.

Ardi Barnard provided the audience with an update on South Korea’s vaccination efforts, and explained the factors behind the country’s relatively effective Covid-19 response, despite the country avoiding strict nation-wide lockdowns.

Clinton Watson described the role he and his team played in drafting the New Zealand Government’s initial COVID-19 strategy, including the Alert System in early-2020, and then updated the audience on China’s vaccination efforts. 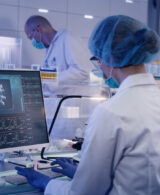